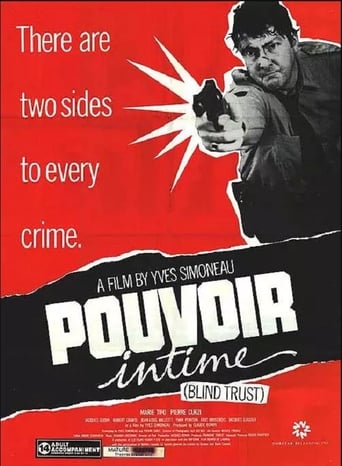 Blind Trust is a movie which was released in 1986 Directing Yves Simoneau, and was released in languages Français with a budget estimated at and with an IMDB score of 5.5 and with a great cast with the actors Marie Tifo Jacques Godin Pierrette Robitaille . A government ministry's fast-rising head of security asks a shadowy fixer, Meursault, to steal a bag from an armored truck. Meursault goes to Théo, a former night club owner, in prison for two years on false charges, who's being released in exchange for information about Montreal's underworld. Théo agrees to steal the bag for money and safe passage to the US for himself and his son Robin. Théo brings in two helpers, Gilder, ex-con and set designer, and Roxanne, Gilder's friend, a tough-minded petty thief. Their elaborate plan blows up when a guard, Marcel, takes his responsibilities too seriously. What happens to father and son? Will any of the thieves escape