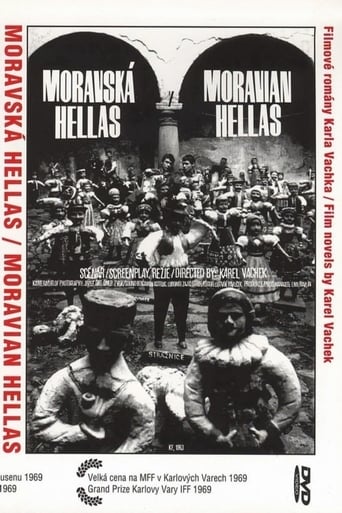 Moravian Hellas is a movie which was released in 1963 Directing Karel Vachek, and was released in languages Český with a budget estimated at and with an IMDB score of 6.0 and with a great cast with the actors Kája Saudek Jan Saudek Alena Karpilová . Karel Vachek’s graduate film offers us a documentary essay which is both a light-hearted and aggressive little piece and also a parody of investigative film journalism. The Strážnice folk festival, backed by the cultural Party apparatus of the time, for years had little to commend itself to authentic folklore. In the film the event assumes the form of a bizarre stage spectacle with almost surrealistic elements that Vachek reinforces with unconventional approaches (commentary appearing as titles on screen, singing, declamations into the camera, feature etudes, the fusion of news coverage and fiction). The result is a stirring film collage depicting various characters, from crowd-pleasers, Easter egg decorators, kitsch artists and peddlers, to museologists and local residents, all of whom come up against the eccentric "identical” twin reporters Karel and Jan Saudek and a bored actress who appears as an extra. Using their special blend of irony and wit, they present us with the sad truth.