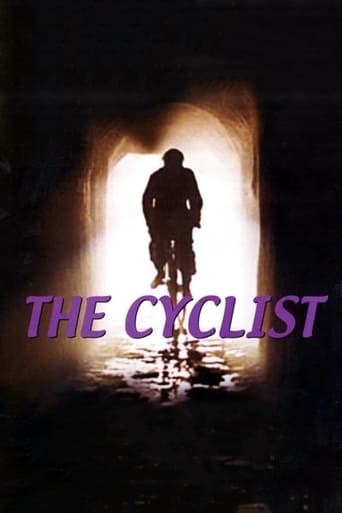 The Cyclist is a movie which was released in 1989 Directing Mohsen Makhmalbaf, and was released in languages فارسی with a budget estimated at and with an IMDB score of 6.4 and with a great cast with the actors Samira Makhmalbaf Mahshid Afsharzadeh Firouz Kiani . The wife of Nasim, an Afghan immigrant in Iran, is gravely ill. He needs money to pay for her care, but his day labor digging wells does not pay enough. A friend connects Nasim to a two-bit promoter who sells tickets to watch Nasim ride a bicycle continuously for a week. The promoter brings in sick and aged spectators, haranguing them to find hope in Nasim's strength. Aided by his son, who feeds him as he rides, Nasim grinds out the days and shivering nights. Local officials believe this may be a plot and Nasim may be a spy; they try to sabotage him as do those who bet he won't finish the week. Will desperation alone get Nasim the money? Is any triumph an illusion?