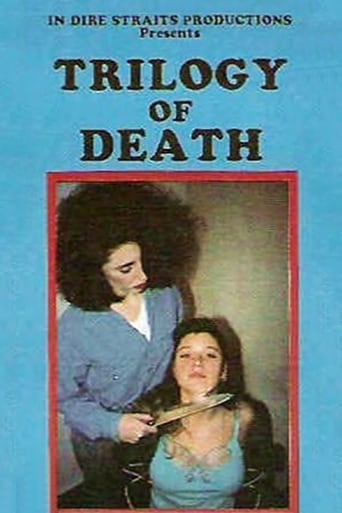 Trilogy of Death is a movie which was released in 1991 Directing Gary Whitson, and was released in languages en with a budget estimated at and with an IMDB score of 0.0 and with a great cast with the actors Terri Lewandowski Clancey McCauley Michelle Caporaletti . Three videotaped tales of murder and treachery! “Doublecross XX” finds a spoiled little rich girl (Clancey McCauley) planning her own kidnapping. But her scheme goes awry when her stepmother (Launa Kane) learns of the plot and puts her own plan into action, leading to tragic consequences for both women. In “The Bank Heist” a newly appointed bank manager (Michelle Caporaletti) finds herself at the mercy of a sadistic bank robber (Shelley Deuber). Unless she talks, she'll die horribly! She's left bound and gagged in a car that's quickly filling with deadly carbon monoxide! And in “The Intruder” a beautiful woman (Caporaletti again) is stalked by a rapist (David Shore) and then held captive by her attacker until he's ready to act!