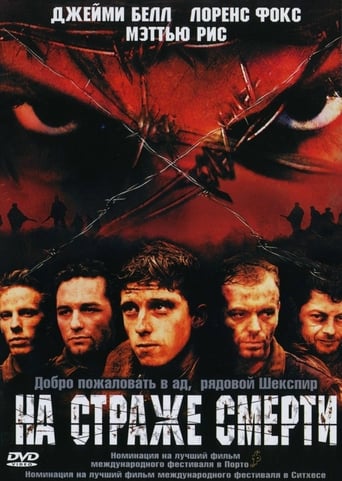 Deathwatch is a movie which was released in 2002 Directing M.J. Bassett, and was released in languages Deutsch | Français | Polski | English with a budget estimated at and with an IMDB score of 5.9 and with a great cast with the actors Andy Serkis Rúaidhrí Conroy Laurence Fox . In the brutal trench fighting of the First World War, a British Infantry Company is separated from their regiment after a fierce battle. Attempting to return to their lines, the British soldiers discover what appears to be a bombed out German trench, abandoned except for a few dazed German soldiers. After killing most of the Germans, and taking one prisoner, the British company fortifies to hold the trench until reinforcements can arrive. Soon, however, strange things being to happen as a sense of evil descends on the trench and the British begin turn on each other.