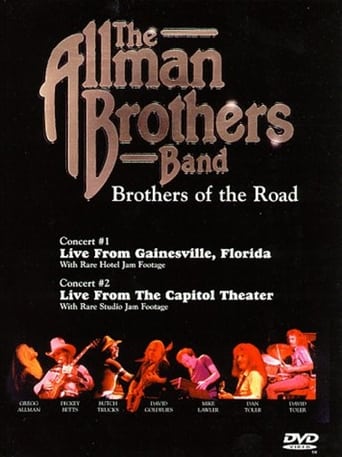 The Allman Brothers Band: Brothers of the Road (1998)

The Allman Brothers Band: Brothers of the Road is a movie which was released in 1998 Directing Len Dell'Amico, and was released in languages en with a budget estimated at and with an IMDB score of 4.3 and with a great cast with the actors Gregg Allman The Allman Brothers Band Butch Trucks . In these two live concerts, rock's legendary Allman Brothers Band whip up the kind of excitement their fans have loved for years. This pioneering Southern rock band, including Gregg Allman and Dickey Betts, blazes through their classics in a concert performance live from Gainesville, Florida. Then the band rocks for more than an hour at the Capitol Theater. Also included is rare footage of an on-the-road hotel room jam session and a peek at a private acoustic "unplugged-style" session in a recording studio. Songs: Pony Boy, Jessica, Let Me Ride [Hotel Jam], You Don't Love Me, Blue Sky, Statesboro Blues, Whippin' Post, Never Knew How Much (I Needed You), Danny Blue, The Preacher, Melissa [Studio Jam], Come and Go Blues, Can't Take It With You, Crazy Love, One Way Out, In Memory of Elizabeth Reed, Southbound, The Judgment, Ramblin' Man. Includes performances from Gainesville, Florida (October 26, 1980) and New York City's Bottom Line (December 16, 1981).