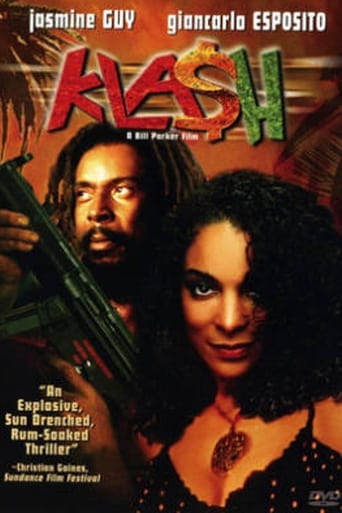 Klash is a movie which was released in 1995 Directing Bill Parker, and was released in languages English with a budget estimated at and with an IMDB score of 0.0 and with a great cast with the actors Jasmine Guy Giancarlo Esposito Cedella Marley . Reggae music is featured in this romantic thriller set in Jamaica. Stoney (Giancarlo Esposito), a photojournalist, is assigned by a U.S. music magazine to cover a battle of the bands in Jamaica. There he becomes involved with the seductive Blossom (Jasmine Guy) who works for Mr. Lee (Lucien Chen), a crime boss. Lee is planning to rob the concert box office. Blossom tries to convince Stoney to help her steal the money from Lee and escape to another island paradise. Interspersed amongst the action are many clips of the reggae bands as they musically battle it out.