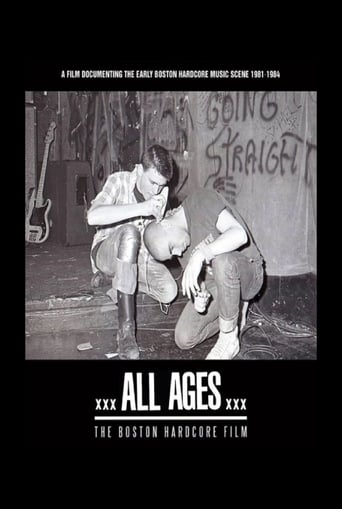 All Ages: The Boston Hardcore Film is a movie which was released in 2012 Directing Drew Stone, and was released in languages English with a budget estimated at $25,000 and with an IMDB score of 0.5 and with a great cast with the actors Jake Phelps Jonathan Anastas Jack "Choke" Kelly . A documentary film that explores the early Boston Hardcore music scene from the years 1981 through 1984. This film delves into the social and communal aspects of that particular era. The community, culture, straight edge and DIY (do it yourself) ethic of the time are all explored in the film. Never before seen archival footage, photographs, interviews and dramatizations make up the body of the film. Bands included are SS Decontrol, DYS, Gang Green, The FU's, Jerry's Kids, Negative FX, The Freeze, and more.