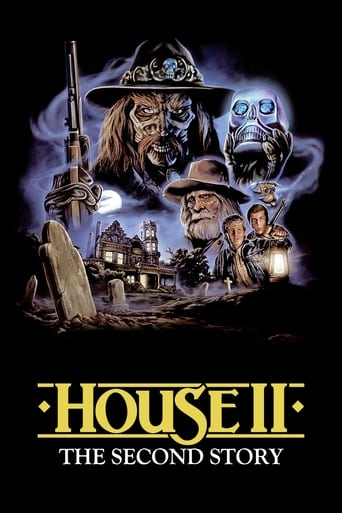 House II: The Second Story is a movie which was released in 1987 Directing Ethan Wiley, and was released in languages English with a budget estimated at and with an IMDB score of 5.6 and with a great cast with the actors Frank Welker Arye Gross Jonathan Stark . Young urban professionals Jesse (Arye Gross) and his girlfriend Kate (Lar Park Lincoln), move into an old mansion that has been in Jesse's family for generations. They are soon joined by Jesse's goofy friend Charlie (Jonathan Stark), who brought along his diva girlfriend Lana (Amy Yasbeck), in the hopes of being discovered by Kate, who works for a record company. Jesse has returned to this old family mansion after his parents were murdered when he was a baby. While going through old things in the basement, Jesse finds a picture of his great-great grandfather (and namesake) in front of a Mayan temple holding a crystal skull with jewels in the eyes. In the background is a man Jesse learns is Slim Razor, a former partner of his great-great grandfather turned bitter enemy after a disagreement over who would get to keep the skull.