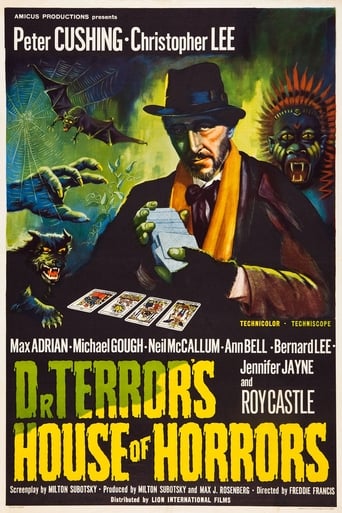 Dr. Terror's House of Horrors is a movie which was released in 1965 Directing Freddie Francis, and was released in languages English with a budget estimated at and with an IMDB score of 6.3 and with a great cast with the actors Jeremy Kemp Bernard Lee Donald Sutherland . Five strangers board a train and are joined by a mysterious fortune teller who offers to read their Tarot cards. Five separate stories unfold: An architect returns to his ancestoral home to find a werewolf out for revenge; a doctor discovers his new wife is a vampire; a huge plant takes over a house; a musician gets involved with voodoo; an art critic is pursued by a disembodied hand.